It was Midsummer last week so there was a lot going on. As the previous post threatened to grow to unmanageable proportions bisection was the obvious answer. For continuity purposes you might like to read Part The First, first!
Right, all caught up? Then off we go!

Not content with offering 84 adults the opportunity to work on the professional stage through its flagship 2016 production A Midsummer Night’s Dream: A Play For The Nation, the RSC has also been extremely busy ensuring that the next generation engage with this most popular of Shakespeare plays. Regular readers will be aware that bands of fairies up and down the country have been drafted into the production and received excellent coaching from the RSC mentors (click here). The Education Department has also produced first rate supportive materials to encourage teachers to explore the play with their pupils in their own schools (click here).

Last week another family oriented experience took place on the banks of the Avon namely the Fairy Portal Camp – click here. This was devised and led by Slung Low theatre company assisted by The School Of Night and RashDash. The camp’s aim was “to reopen the connection between us and the spirit world” and was loosely based on Shakespeare generally and some of the themes in The Dream. During the week visiting participants could simply drop in and take part in free activities including willow-work, poetry classes, improvisation, cooking, costume making, singing, dance classes and writing workshops. Each evening a silent disco ‘fairy rave’ took place around a bonfire, dinner featuring vegan food was served and performances of song, dance, drama and poetry took place under the trees. Celebrations culminated on Saturday 25th June with the attempt to ‘open the portal’ between the two worlds through a theatrical immersive ceremony of feast, fire and song – complete with mechanical dolphins travelling down the River Avon. 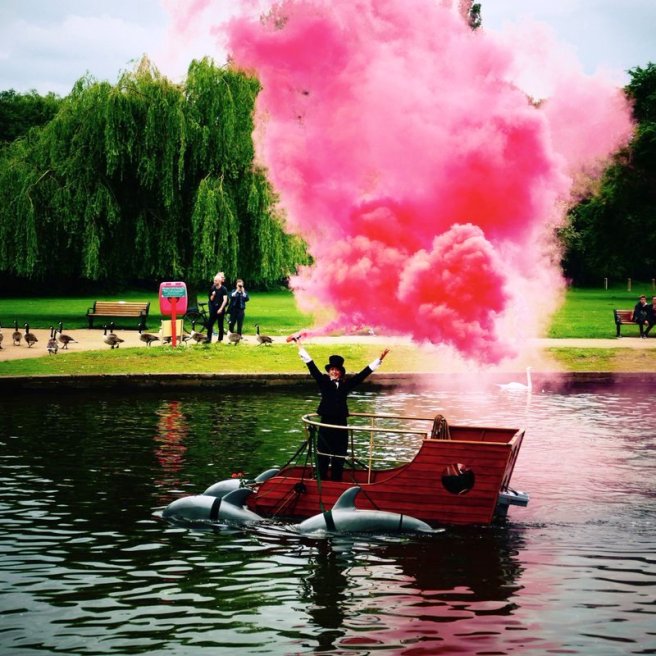 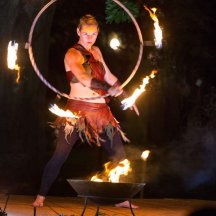 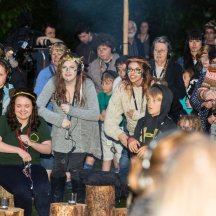 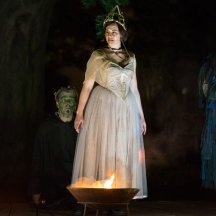 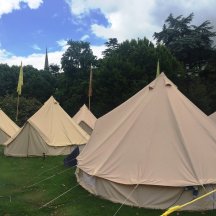 Sounds irresistible and so it proved to one of the Tower team. Having already seen a performance at the RST earlier in the week our trusty man of action Al, (“one Snout by name”) took the long road back to Stratford.
Dream 2016 producer Ian Wainwright had put out a call for participants for a flash mob which would suddenly appear and do the main production’s Bergomask dance in the Fairy Portal Camp, a collection of tipis up near Holy Trinity Church (presumably so that Will could keep an eye on things). I thought twice about going (and Ian clearly thought I was mad to turn up), but the journey free of weekday traffic early on Saturday was smooth, and I was spurred on by the hope of getting a day ticket for the evening ceremony in order to make a day of it.

I was first in the queue at the theatre, only to find, when they opened at 10.00am, that the Fairy Portal tickets were down at The Other Place, to which place I duly ran, arriving to find myself about sixth in the queue. Worse was to follow: there were no day tickets at all! But Matthew from The Other Place took my phone number, and during the morning he called me to let me know that a ticket had become available.

This was as I was coming away from the aforementioned flash mob performance of the Bergomask. This actually got close to being a flash flood as the heavens opened just as Ian was deciding where (and even if) we should perform. After a few minutes under umbrellas, it got so bad that we had to take refuge in a tipi where we were made welcome until the rain stopped. After that, the Bergomask went ahead led by Glasgow’s Bottom, Martin Turner. The mob was a motley crew, including the Glasgow Citizens Dream team who were

currently playing the Mechanicals, members of the main company including stage management and production, other assorted Mechanicals like me, and director Erica who, fittingly, knew all the dance moves. The opening of the Fairy Portal, later, was a magical evening of storytelling, songs, dancing, eating, and transformation leading up to the final summoning ceremony.

In between these two events I went to the newly refurbished and reopened Other Place for a coffee and found myself taking the tour of the building (recommended). It was a particular pleasure to see a picture displayed of the first read-through of our Dream production at Clapham; this was outside the top floor rehearsal room on a revolving slide show screen (if you see what I mean). Long may it stay there! And there I was in the picture, and there were all of the Tower cast with the main company. Ian Wainwright had said after that read-through, that there was a big sigh of relief when it became clear that this Dream bird was going to fly. And we are soon flying up to Stratford for our two nights onstage on the 11th and 12th July, not by private helicopter, but hey, are we looking forward to it…………!

With you on that one, Al and thanks for your report. 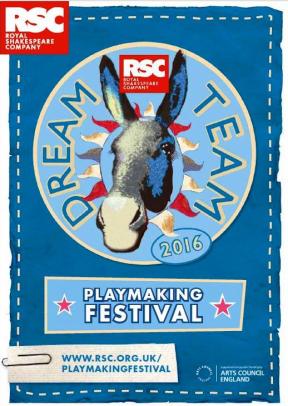 As you’ll have gathered by now the RSC is VERY big on A Midsummer Night’s Dream this year and the next addition to the growing roster of events is the Dream Team Playmaking Festival. Last year schools were invited to put together a production of a specially commissioned half hour adaptation of the play and now over 50 schools (and 1,600 children) have been invited to Stratford to give a performance of their version at either The Other Place or The Dell, the open air performance space which had hosted the Fairy Portal Camp. Another great feat of logistics by the backroom boys and girls of the RSC but one that really shows their commitment to inclusivity. I’ll have more to say on all this in my next post as I’m going to sample one of these performances alongside a visit to the main house production and, now that I’ve seen Al’s report, I’ll hopefully fit in a tour round The Other Place exhibition. It’s all go, isn’t it?

Meanwhile (and talking of impressive logistics) let’s wrap up this post with some of the statistics which have characterised the touring production:

The production runs for two more weeks in Stratford upon Avon. Click on the image below for details